A Primer on the Reverse Repo

You may have seen charts like these where record usage of the Fed's Reverse Repo facility is used to imply that the "system is breaking". Let's dig into what exactly the reverse repo is and why it is important. 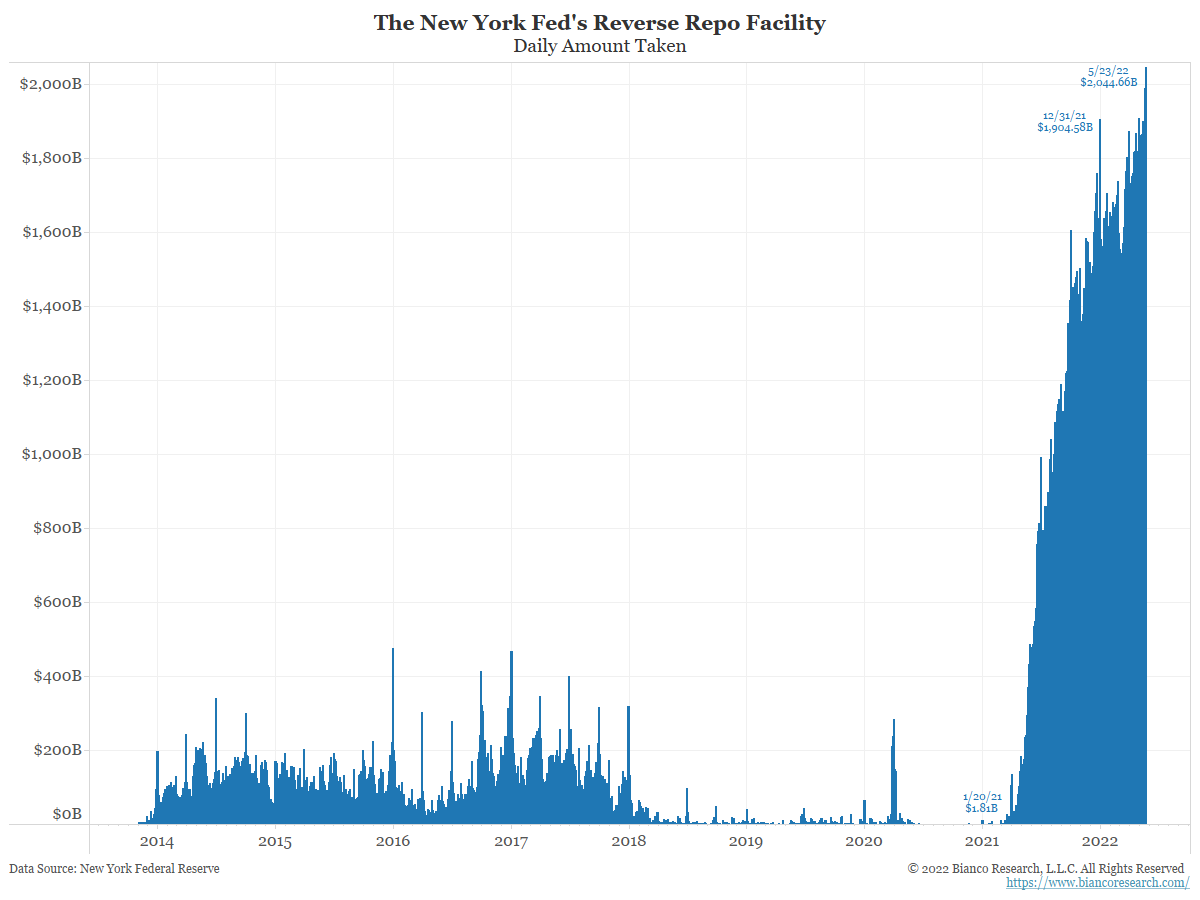 How Interest Rates are Managed Today

The flood of reserves effectively lowered interest rates because banks now had more money to loan. The increased money supply made money "cheap". Since the Fed can no longer adjust the total amount of reserves to influence interest rates they now use different methods.
The first is by adjusting the Interest on Excess Reserves or the IOER. This allows the Fed to control the amount of money released into the economy domestically.
The other method the Fed uses to manage interest rates is via the Overnight Reverse Repo Facility. This is what allows the Fed to control the money supply that is outside of banks.

Prior to the financial crisis, banks were not paid interest on excess reserves. However The Emergency Economic Stabilization Act of 2008 changed this. Suddenly banks had an incentive to hold reserves at the Fed instead of lending it out into the economy.
When the IOER is increased there is more incentive to keep the money parked since it collects more interest. Since the money is parked at the Fed, the economy's money supply is reduced which increases interest rates and reduces economic activity.
Vice versa, when the IOER is decreased banks have more incentive to lend out the money. The money supply is increased and interest rates fall while also producing inflation.

The Overnight Reverse Repo facility sounds complex but it works similar to a pawn shop.
When individuals needs money and have an asset as collateral they can enter into a "repurchase" or "repo" agreement where they sell the asset but then agree to repurchase it at a later date with interest. This gives them an injection of money that was previously locked into the asset.
The lender or buyer of the asset agrees to this since the asset can be used as collateral in event of non-payment and makes some interest if the seller does repurchase the asset. From the lender's side, this is a "reverse repurchase agreement".
In the RRP facility, entities that do no have reserve accounts lend the Fed money while the Fed uses its treasuries as collateral. The banks then collect interest on this loan. When this contract is continuously rolled over day to day, the entity effectively uses the Fed as a savings account despite officially not having a Fed account that can hold reserves.
The RRP facility is essentially a workaround for entities not being able to directly hold funds at the Fed and take advantage of the IOER. This is primarily MMFs and GSEs.
You may wonder however why the Fed needs to borrow money if it can print money. This is because the RRP acts as a sponge to absorb money from the real economy by incentivizing it to be parked at the Fed.
The RRP facility is important because dollars are used globally and this allows the Fed to influence the total supply of dollars.

While the Fed exists with the dual mandate of "maximum employment" and "stable prices" it is also useful to think of it as an entity that keeps the dollar "real" but also must manage the money supply to avoid economic catastrophes.
These two goals are constantly in conflict because enforcing the hardness of the dollar often comes with economic destruction that is politically untenable. For better or for worse, the dollar currently runs the global economy and the Fed must constantly manage its supply at a global scale to keep things running.
The 2008 Financial Crisis was considered so because it broke down the "realness" of the dollar by creating so many reserves out of thin air to bail out irresponsible banks. Though it adverted an economic crisis, there was enough collateral damage that a repeat of the situation was unacceptable. During the 2020 COVID pandemic, the same tools were used once again to inject necessary liquidity when certain asset prices(this time Treasuries) broke down.
As of mid 2022, the Fed's primary goal is to get inflation under control. The chart at the very top shows that the RRP facility is near record highs as money market funds pile into safe havens that are made ever more attractive by the promise of increased interest rates.
Banks are essentially incentivized to keep money out of the system while the everyday individual feels a constant lack of money due to inflation causing price increases and asset prices falling due to liquidity being absorbed into the Fed.
While this increases hardship for many companies and individuals, it is also what Warren Buffet refers to when he says "You only find out who is swimming naked when the tide goes out."
You only find out who is swimming naked when the tide goes out.
-Warren Buffett